BEHOLD 💥 our Lacombe BURGER OF THE MONTH for January! 👏 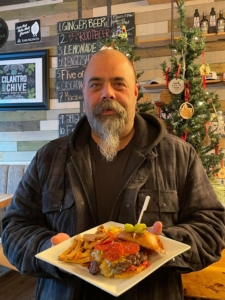 Jon is the President of the Lacombe Flying Club ✈ and has had a Big Brother and knows the importance and impact of such an incredible organization.

The Lacombe Flying Club was formed in 1962 by a group of local pilots who wished to establish an airport in the Lacombe area. Suitable adjoining parcels of land were found one and a quarter miles north of the town of Lacombe, with the town purchasing one parcel, and the new flying club purchasing the other, and giving it to the town.

1963 saw the club members working the land and seeding a new grass runway. The following years saw the addition of a row of hangars, some of which are still in use today.

In the spring of 1965, the Lacombe Flying Club hosted their first fly-in-breakfast, along with a little airshow. The club still holds a fly-in-breakfast each year, with hundreds of local residents flying, driving, and even walking in for breakfast.

Around 1975, with federal grant money, the Lacombe Airport received a new paved runway that accelerated the growth of the airport. Today, the City of Lacombe and the Lacombe Regional Airport have grown together, with the Lacombe Flying Club now boasting around 80 members, and the airport boasting 45 hangars, a new terminal building, and close to 80 airplanes.

The Lacombe Flying Club is proud of all the work they have accomplished and continue to do, to give Lacombe and surrounding area one of the finest little airports in western Canada.

The Lacombe Flying Club has chosen Lacombe BBBS to be the benefactors of January’s Cilantro and Chive Burger of the Month. BBBS is an important part in the lives of so many of today’s youth, and we hope you will help support them by enjoying the Pizza Burger! ❤️ 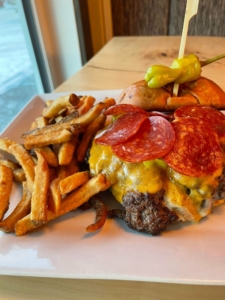