Does it get much better than not one but TWO guest chef’s and TWO Burgers?!  It was a first for our beloved Burger of the Month Program and it was a hit!

The Peck’s were keen to support youth in our community and they couldn’t think of an organization that does better work with local young people than BBBS.  Alvin Peck points to the impact the programs offered make on kids “The young people are our future and if they have early exposure to community and caring hopefully, they will share that with others as they go through life”. 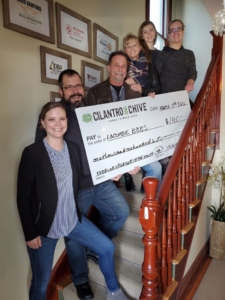 Big Brothers Big Sisters of Lacombe and District is currently working with 162 youth through their various mentoring programs like In School Mentoring, Community Based Mentoring, Tutoring Tuesday, Kids and Kops, Go Girls and Game On.  These programs push youth to reach their full potential and help them avoid many risk-taking behaviours; with kids matched with a volunteer staying in school longer, seeing better grades, being more productive, as a result, they are less likely to offend.

The Peck’s were thrilled to turn over a cheque for $1,160 today, dollars BBBSLD will use directly for mentoring programs.  Every $1 invested in mentoring returns $23 in social return to society, with mentored youth seeing long term positive results in life, in community and at work.  BBBSLD recently celebrated two 10-year matches which is a testament to the success of their programs and how they create a long-term impact.

We’re blessed with the BEST guests who get behind our Burger of the Month program month after month, allowing us the opportunity to give back over $60,000 to local charities over the past 37 months!  THANK-YOU!

The March Burger of the Month is the “Date Night”.  It includes grilled chicken, date and apple jam, melted brie, apple slices, cucumber slices, spinach and garlic parmesan aioli on a brioche bun!  It was created in collaboration with local Guest Chef Brenda Sargeant with $2 from every burger sold going directly to her charity of choice Turning Point Society’s Women’s Program