A burger stuffed with Babybel cheese?!  Oh HECKYEAH that’s what went down at our Red Deer location, the perfect burger to kick off summer! 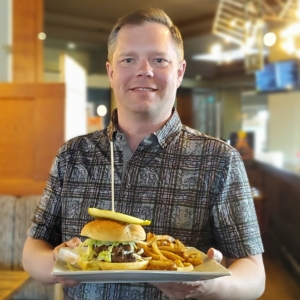 It is with a heavy heart that Doug made his charity selection, in honour of co-worker and friend Albert Lee, who recently passed away from an aggressive form of Parkinson’s Disease.  Doug notes “Albert cared deeply for his wife, children and grandchildren and the disease not only shortened his successful career, but also robbed him of time with his family”.

Parkinson disease is a progressive neurological disorder.  It mainly affects parts of the brain controlling movement.  There is currently no cure for Parkinson disease and no treatment has been proven to slow, stop or change the progression of Parkinson’s.  Parkinson Association of Alberta provides support, services, and programs for the more than 15,000 people living with and loving those with Parkinson disease in Alberta, including one-on-one/family support counselling, support groups, information and resources, education sessions, help identifying community and government resources and more. 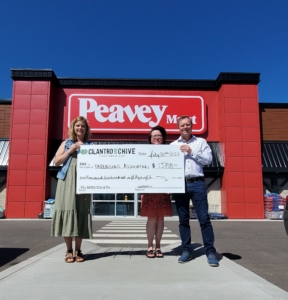 Thanks to your support of our beloved Burger of the Month Program Doug helped us hand over $1588 to the Parkinson’s Association today (Wednesday, July 20th).  Thanks to the amazing support we see from our guest’s month after month, we have had the opportunity to give back over $105,000 to local charities over the past 65 months!