BOOM!  Much like our firecracker of a Guest Chef for April in Lacombe, burger sales most definitely went off like a bang!

Supporting women and children impacted by family violence is a cause close to Merry’s heart, as she has seen the effects firsthand.  Long ago, she herself was able to leave a difficult situation with the help of a caring support network.  Merry would love to pay it forward to local women who are seeking safer futures for their families.

We all know these are extremely difficult times, and Roxanne Kirton with CAWES says the pandemic has added a layer of complexity to domestic and intimate partner violence, due to the vulnerability of families and isolation requirements.  Experts have reported a 57% increase in calls, texts and chats to Alberta’s One Line for Sexual Violence since the start of the pandemic, and there’s also been an increase of calls to the shelter’s 24-hour crisis line and requests for admission.  Further complicating an already dire situation Kirton says CAWES has lost a significant amount in donations due to cancelled fundraisers and events because of the pandemic over the last year.  Kirton says donations like this one will help them continue to provide a safe and secure place for women and children to live, when their home is too dangerous.  Children have access to a safe bed, clothes, school supplies and their Children’s Healing Centre and mothers have access to 24-hour crisis intervention and emotional support, nurturing parent programs and support groups and individual cognitive Behavioral Therapy. 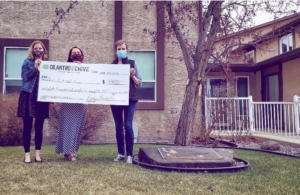 Thanks to your support of our beloved Burger of the Month Program Merry helped us hand over $888 to the Central Alberta Women’s Emergency Shelter today.  Thanks to the amazing support we see from our guests for our Burger of the Month program month after month, we have had the opportunity to give back over $75,000 to local charities over the past 51 months!  THANK-YOU!

The May Burger of the Month in Lacombe is the “” created in collaboration with Guest Chef Jamil Rawji of Ponoka Professional Pharmacy, one of our first Cilantro and Chive customers.  It includes……! $2 from every Lacombe April Burger of the month sold will go directly to Jamil’s charity of choice…….