Incredible. The only word that works to describe our July Burger of the Month Guest Chef’s in Lacombe, Kody and Kelsey Kenway! We first met this couple over 5 years ago when they entrusted us to cater the food for their wedding, and each year they return to visit us to celebrate their anniversary, wedding dress, suit and all! This year they cranked the celebration WAY up and jumped out of a plane together in their duds! 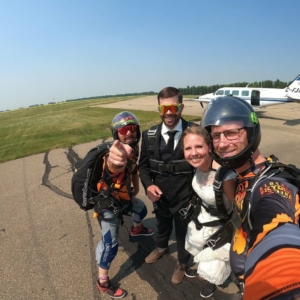 Not only are Kody and Kelsey incredible humans, but their story around their charity selection is also moving. Without STARS Kody would not be here. In September of 2015 Kody was in a motor-vehicle accident that resulted in significant polytrauma, suffering traumatic brain injury, collapsed lungs, a ruptured spleen, broken bones and more, leading to a stroke and left-sided paralysis. At the time the couple was recently engaged and set to be married July of 2016. Despite 3-4 challenge filled months, the couple was married as planned and remains forever thankful to STARS and all the medical staff and supporters they have encountered along the way. 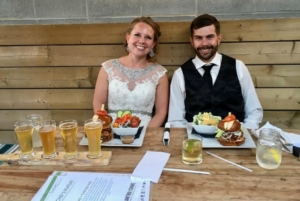 STARS Air Ambulance is dispatched an average of 8 missions a day, flying over 1400 yearly missions in Alberta. Donations and fundraising account for nearly 40% of funding, allowing them to save lives equipped with the right tools, technology, and fleet to ensure timely critical care even in remote locations.
Thanks to your support of our beloved Burger of the Month Program we were able to deliver $1468 to STARS (Tuesday, August 10th). The Kenway’s were also inspired to match our donation to a local organization they are also passionate about, A Better World. Kelsey had the opportunity to travel to Africa with the Lacombe based group on a volunteer rehabilitation effort, focused on addressing the needs of children with disabilities. The Kenway’s also delivered $1468 to A Better World today!
Thanks to the amazing support we see from our guests for our Burger of the Month program month after month, we have had the opportunity to give back over $85,000 to local charities over the past 54 months! THANK-YOU! 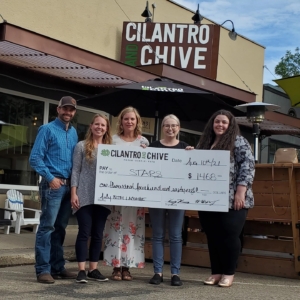