Very excited about unwrapping 🅳🅰🆈 🆃🅷🆁🅴🅴 of our LACOMBE Craft Beer Advent Calendar! 🎁📅
“𝙒𝙍𝙄𝙏𝙀𝙍’𝙎 𝘽𝙇𝘼𝙉𝘾”
Barrel-Aged Mixed Fermentation Sour
Trial & Ale
Edmonton, AB
6.0% ABV
Hops have played an important role in the craft beer world since the beginning of the scene’s renaissance.
How the hop has expressed itself has varied and evolved ever since. Admittedly, in the world of sour mixed fermentations, the hop is an understated bit player compared to many other starring role styles, however the uses continue to evolve.
Known for its bitter qualities and its inherent preservative nature, many other vital contributions go unnoticed. In the world of sour beers, dry hopping is the reference standard of uses. Playing up the aroma and flavour of the hop, while minimizing the bitterness is key to a pleasurable experience when combined with acidity. One of our favourite hop varietals that resonates with us and never disappoints is Hallertau Blanc. 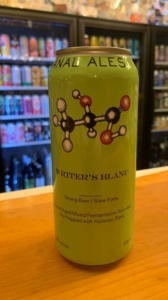 With a white wine character, and confusingly fruity AND floral notes, it offers a complex nose and flavour that is typically achieved through hop combinations. While grown in the Hallertau region, it is a far cry from its noble namesake. In actuality, this hop is a close relative of the Cascade varietal from North America, albeit with a distinctly German terroir.
✨ Missed out on our calendar? Come grab wrapped 4-packs of amazing local Craft Beers from our fridge for only $20 or 20% OFF anything you want for off-sales!
We’re going a little darker again for Day Four tomorrow! See you then!
.
.
.
#drinklocal
#HECKYEAH
#cilantroandchive
https://cilantroandchive.ca/wp-content/uploads/2020/12/CilantroChive-HLogo-v2b-li.png 0 0 Jason Burns https://cilantroandchive.ca/wp-content/uploads/2020/12/CilantroChive-HLogo-v2b-li.png Jason Burns2022-12-03 11:57:352022-12-01 10:53:24DAY 3 – LACOMBE Craft Beer Advent Calendar
0 replies